Home / Advertising / An Innovative Solution to a Plastic Problem

Biodegradable and Edible Beer Can Holders

We Believers, an advertising house in New York and Saltwater Brewery, a craft beer brewing company in Delray, Florida, have teamed up to produce an edible, environmentally friendly six-pack holder for beer cans. The holders are created from the barley and wheat that is left over from the beer making process. The holders are environmentally friendly, edible, decomposable and safe for animals and sea life. While I do not plan to nibble on one with my morning tea, the holders are also safe for human consumption. The article describes this innovative and fresh approach to solving an environmental issue that has plagued our outdoors since the implementation of plastic six-pack can holders. 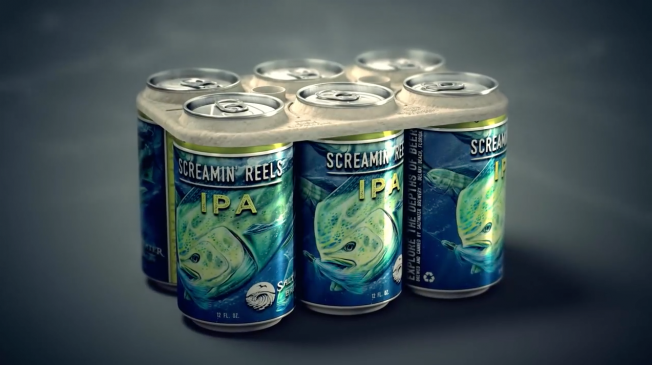 Business Social Responsibility
“Together with Saltwater Brewery, a small craft beer brand in Florida whose primary target are surfers, fishermen and people who love the sea, we decided to tackle the issue head on and make a statement for the whole beer industry to follow,” says agency co-founder and chief strategist Marco Vega. (Adweek, 2016)
The current plastic rings found on beer cans, soda cans, and even pet food cans, are not environmentally friendly and they are a danger to wildlife, sea life, and even household pets. The new can holders would not only decompose, but also feed ocean life.
Surfers run the business and their target audience is others that share their love of surfing and the outdoors. Love and respect of the outdoors and its inhabitants prompted them to produce an innovative solution to a known problem. The social and environmental benefits of their actions are worth considering. The only downside is the added expense to produce the rings. A video produced to explain the product, included testimony from a member of their target market claiming he would have no problem with the additional expense knowing the benefit of the edible holder.

Favorable Impact
The loyalty to the brand, the positive impact on the environment and wild life, is a welcome tradeoff to the devastation caused by the plastic six-pack rings. If other distributors pick up the holders, the impact could be quite substantial. Anyone with pets may also have a favorable response to the implementation of the holders, as it is not just sea life and wildlife we need to be concerned about. Consumers may never have first hand experience with sea turtles or sea birds, but I also read an article from PETA featuring a cat entangled in the plastic rings. Although the cat mentioned in the article was feral, it demonstrates how the rings can be a danger to cats. Consumers can relate to a cat even if they can’t relate to a sea turtle.

Additional Information and My Personal Thoughts
Personally, I am excited by the prospect of reducing waste in our landfills and saving creatures of all kinds. I see no downside to the new holders. Their innovated reproduction of a controversial product is an excellent example of product innovation and social and environmental awareness. The added expense may be an issue initially, but I also believe that if other companies adopt the edible holders, the expense of mass-producing them will be less while the positive impact on the environment greater. I would like to believe it would become socially unacceptable not to use them when there is a much better solution. Although it took a while, we have seen the movement away from plastic bags to reusable canvas or recycled plastic bags. Of course there are still consumers that continue to use only plastic, but legislation has been suggested to limit and or ban their use. (State Plastic and Paper Bag Legislation, 2015) Hopefully with the holders as a viable alternative to the plastic rings, they will have a similar response. Although I am hopeful, I am also skeptical.

Since reading the article on Adweek, I have read similar articles touting the benefit of the new holders posted on numerous sites across the Internet. So far all of the feedback that I have read on many of the articles has all been positive. That is not to say there are not any naysayers, I just have not come across them yet.

Current and Potential Competitors
While don’t view this as a competitive product, considering the idea is to get as many companies on board as possible. I do believe that consumers that wish to be perceived as economically responsible, may see this as a way to show they are doing their part, even if it means paying more. The same applies to companies that want to be seen as economically conscientious.
If the holders do take off, it may open the door for other companies to produce the holders, creating competition to make better or cheaper versions that are equally beneficial.

Kelly Ann has a BS in Communication: Integrated Marketing, a degree in Interactive Media Design, and she is Certified through The New York Institute of Photography as a Professional Photographer. She enjoys spending time with her sons, reading, writing, sketching, painting, designing layouts, and capturing moments with her camera.

Merry Christmas from my family to yours! … END_OF_DOCUMENT_TOKEN_TO_BE_REPLACED

"The only place where success comes before work is in the dictionary." -- Vidal Sassoon No one understands … END_OF_DOCUMENT_TOKEN_TO_BE_REPLACED

While not all holidays and observations are appropriate for marketing purposes, many might just be the perfect fit for … END_OF_DOCUMENT_TOKEN_TO_BE_REPLACED

This Week’s Frequently Asked Question After a few months of enjoying their shiny new websites, clients often ask for … END_OF_DOCUMENT_TOKEN_TO_BE_REPLACED

Provide as much information about your project as you can and someone will be in touch with you within 24 hours.